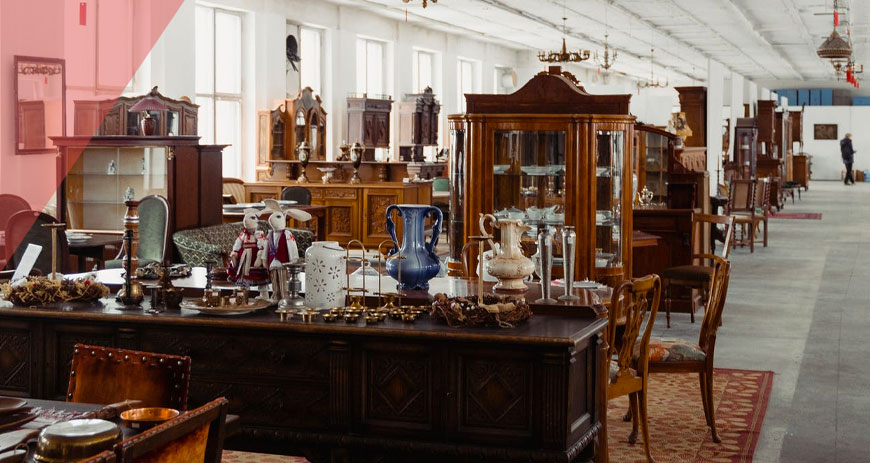 Larry Li purchased the business with his wife, Grace Li in 2000. Expanding the mall, the two moved the business to SoDo’s Lander Street, opening 30,000 square feet of space, which housed 150 vendors eventually.

Enduring the economic realities that forced other Seattle antique malls to close, Pacific Galleries remained the go-to destination for buyers and collectors.

Li remains the owner of the building, giving Gorz a long lease, even as she offers office and storage spaces for rent in the building. Gorz began his business as a collector and later a dealer in Southern California, before moving to Seattle to continue offering the Tom Gorz Collection of mid-century art, jewelry, and housewares.

After vending for a decade at Pacific, Gorz partnered with Matthew Culbert to open Epic Antiques, which has 60 vendors in its antique mall space. The building that houses Epic also offers office space for rent and a monthly flea market.

Buyers may expect some of the Epic experience at Lander Street Vintage when it opens. Known for an upbeat ambiance and welcoming vibe, Gorz’s malls are like an immersive experience complete with beautiful spaces, antiques, and sounds of varying musical genres.

Gorz plans for each mall to maintain uniqueness, while both bring a welcoming air to antique enthusiasts.

Gorz vision for Lander Street comes as a miracle of sorts for more than 150 vendors who had been told Pacific was closing. Many had already begun slashing prices and closing down. Shortly before Epic’s scheduled closing, the owners reached an agreement with Gorz that keeps an antique mall in the space.

Vendors have been informed that they may stay in the stalls, after securing a contract for their space with Gorz. While the last-minute agreement saves the facility, some vendors have already moved on.

Still, with Pacific officially closed on August 31, Li and Gorz are working feverishly to maintain an original and eclectic antique mall experience on Lander Street in Seattle.